Although tornadoes and hurricanes are, in fact, cyclones, the vast majority of cyclones are not hurricanes or tornadoes. The term "cyclone" simply refers to the circulation around any low-pressure center, no matter how large or intense it is. Thunderstorms, storms containing lightning and thunder, are related in some manner to tornadoes, hurricanes, and midlatitude cyclones.

Dynamic thermal instability occurs during the development of thunderstorms, which form when warm, humid air rises in an unstable environment. A number of mechanisms, such as unequal heating of Earth's surface or lifting of warm air along a front or mountain slope, can trigger the upward air movement needed to create thunderstorm-producing cumulonimbus clouds. Severe thunderstorms produce high winds, damaging hail, flash floods, and tornadoes.

In the United States, air-mass thunderstorms frequently occur in maritime tropical (mT) air that moves northward from the Gulf of Mexico. During the spring and summer, when the air is heated from below by the warmer land surface, the warm, humid air mass becomes unstable and thunderstorms develop. Generally three stages are involved in the development of a thunderstorm. The cumulus stage is dominated by rising currents of air (updrafts) and the formation of a towering cumulonimbus cloud. Falling precipitation within the cloud causes drag on the air and initiates a downdraft that is further aided by the influx of cool, dry air surrounding the cloud, a process termed entrainment. The beginning of the mature stage is marked by the downdraft leaving the base of the cloud and the release of precipitation. With gusty winds, lightning, heavy precipitation, and sometimes hail, the mature stage is the most active period of a thunderstorm. Marking the end of the storm, the dissipating stage is dominated by downdrafts and entrainment. Without a supply of moisture from updrafts, the cloud soon evaporates. It should be noted that within a single air-mass thunderstorm there may be several individual cells, that is, zones of adjacent updrafts and downdrafts.

Cumulus Stage: Rising air, or updraft, cools and forms the cloud. The rising air is occurring in an environment that is favorable for convection. Lifting mechanism include solar heating or convergence from a sea breeze. It is not raining during this stage of the thunderstorm.

Mature Stage: As the cloud continues to grow, precipitation particles form and fall from the cloud. The precipitation falls into the updraft. The falling particles drag air down with them. This sinking air is referred to as downdrafts. Entrainment into the downdraft results in some evaporation of the precipitation, which causes a cooling which makes the air more dense, thus increasing the downdraft. Rain begins to reach the surface. Hail may also make it to the surface, but they are not very large.

Dissipating Stage: When the downdrafts encompass the storm, the updrafts are shut off and the storm begins to die. The intensity of the rain decreases. Mountainous regions, such as the Rockies in the West and Appalachians in the East, experience a greater number of air-mass thunderstorms than do the Plains states. Many thunderstorms that form over the eastern two-thirds of the United States occur as part of the general convergence and frontal wedging that accompany passing midlatitude cyclones.

Severe thunderstorms are capable of producing heavy downpours and flash flooding as well as strong, gusty straight-line winds. Although air-mass thunderstorms seldom produce severe weather, severe storms are influenced by strong vertical wind shear, that is, changes in wind direction and/or speed between different heights, and updrafts that become tilted and continue to build upward. Downdrafts from the thunderstorm cells reach the surface and spread out to produce an advancing wedge of cold air, called a gust front, which may form a roll cloud as warm air is lifted along its leading edge. Severe thunderstorms
--form as warm moist air ahead of a cold front is forced to rise into unstable air or along squal lines
-- micorburts - strong downward winds which can exceed 100 mph
--strong vertical winds may cause the storm to rotate - possible tornado formation
--capable of producing large hail, strong winds, flash floods and tornadoes

Some of the most dangerous weather is produced by a type of thunderstorm called a supercell, a single, very powerful thunderstorm cell that at times may extend to heights of 20 kilometers (65,000 feet) and persist for many hours. The vertical wind profile of these cells may cause a mesocyclone, a column of cyclonically rotating air, within which tornadoes often form. Supercells appear to form as inversion layers are eroded locally, and unstable air "erupts" from below to form unusually large cumulonimbus clouds with concentrated, persistent updrafts.

Squall lines are relatively narrow, elongated bands of thunderstorms that develop in the warm sector of a middle-latitude cyclone, usually in advance of a cold front. Some develop when divergence and lifting created by an active jet stream aloft is aligned with a strong, persistent low-level flow of warm, humid air from the north. A squall line with severe thunderstorms can also form along a boundary called a dryline, a narrow zone along which there is an abrupt change in moisture. VIDEOS ON WHAT CAUSES LIGHTNING There were 11 total tornadoes Saturday - 6 on Long Island New York (plus one Friday in the mid Hudson Valley of NY), 4 in Connecticut and 3 in Rhode Island (2 of the tornadoes crossed from CT into RI). 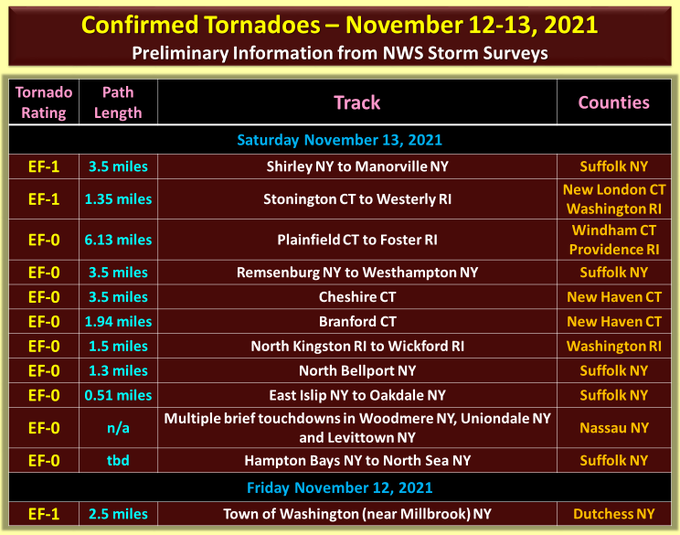 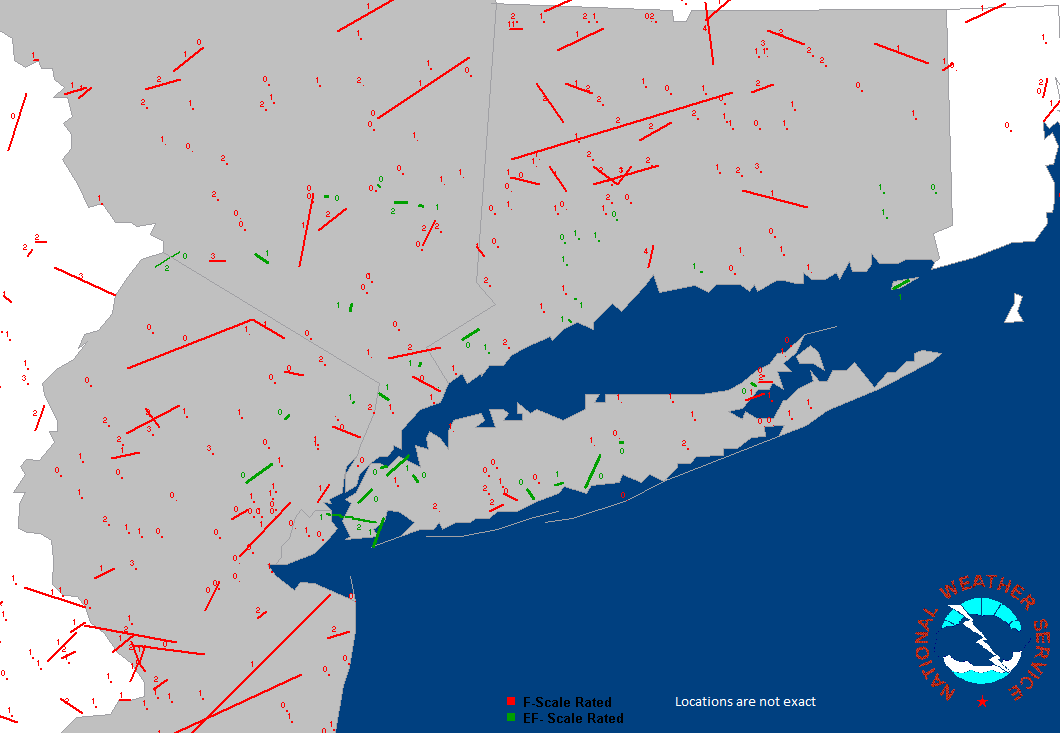 Enhanced Fujita Scale
Developed in 1971 by Tetsuya "Ted" Fujita (1920 - 1998) "Mr. Tornado"  of the University of Chicago
The Fujita Scale is based on structural strength and engineering research done by Ted Fujita and a host of others. This research created the Fujita scale as a measurement of a tornadoes strength or intensity. Simply put, how intense would a wind have to be to move a cardboard box or to move bricks?  One questions to ask would be:  How fast or intense would the winds have to be to knock over a brick wall,? Obviously those winds would be significant.  Through extensive research the Fujita Scale was developed based on damage, not wind speeds. Based on the extent of this damage conclusions are drawn as to what the winds would likely have to be to cause that type of damage. Since two wooden structured homes can be vastly different in quality and strength, there can be some misleading conclusions from the damage. Because of this and other overly general conclusions, storm researchers came up with the Enhanced Fujita scale to better reflect a tornado’s strength. Below is the new Enhanced Fujita scale started February  2007. 
Thanks to http://www.spc.noaa.gov and http://www.wind.ttu.edu for the new information.
OLD FUJITA SCALE BELOW


A mesoscale convective complex (MCC) consists of many individual thunderstorms that are organized into a large oval to circular cluster. They form most frequently in the Great Plains from groups of afternoon air-mass thunderstorms. Although MCCs sometimes produce severe weather, they also provide a significant portion of the growing-season rainfall to the agricultural regions of the central United States.

The origin of charge separation in clouds, although not fully understood, must hinge on rapid vertical movements within the cloud. The lightning we see as some single flashes are really several very rapid strokes between the cloud and the ground. When air is heated by the electrical discharge of lightning, it expands explosively and produces the sound waves we hear as thunder. The thunder we hear as a rumble is produced by a long lightning flash at some distance from the observer.

Tornadoes, sometimes called twisters, or cyclones, are violent windstorms that take the form of a rotating column of air, or vortex, that extends downward from a cumulonimbus cloud. Some tornadoes consist of a single vortex. Within many stronger tornadoes, called multiple vortex tornadoes, are smaller intense whirls called suction vortices that rotate within the main vortex. Pressures within some tornadoes have been estimated to be as much as 10 percent lower than immediately outside the storm. Because of the tremendous pressure gradient associated with a strong tornado, maximum winds approach 480 kilometers (300 miles) per hour.

Tornadoes form in association with severe thunderstorms that produce high winds, heavy rainfall, and often damaging hail. They form in any situation that produces severe weather, including cold fronts, squall lines, and tropical cyclones (hurricanes). An important precondition linked to tornado formation in severe thunderstorms is the development of a mesocyclone that forms in the updraft of the thunderstorm. As the narrowing column of rotating air stretches downward, a rapidly spinning funnel cloud may emerge from a slowly rotating wall cloud. If the funnel cloud makes contact with the surface, it is then classified as a tornado.

Severe thunderstorms, and hence tornadoes, are most often spawned along the cold front or squall line of a middle-latitude cyclone or in association with supercell thunderstorms. Although April through June is the period of greatest tornado activity, tornadoes occur during every month of the year. The average tornado has a diameter of between 150 and 600 meters, travels across the landscape toward the northeast at approximately 45 kilometers per hour, and cuts a path about 26 kilometers long.

Most tornado damage is caused by tremendously strong winds. One commonly used guide to tornado intensity is the Fujita Intensity Scale, or simply F-scale.In 2007, changed to the EF-Scale. A rating on the F-scale is determined by assessing the worst damage produced by a storm. Whereas most tornado damage is done by violent winds, most tornado injuries and deaths result from flying debris.

Because severe thunderstorms and tornadoes are small and short-lived phenomena, they are among the most difficult weather features to forecast precisely. When necessary, the Storm Prediction Center of the National Weather Service issues severe thunderstorm outlooks several times daily. When weather conditions favor the formation of tornadoes, a tornado watch is issued to alert the public to the possibility of tornadoes over a specified area for a particular time interval. A tornado warning is issued by local offices of the National Weather Service when a tornado has been sighted in an area or is indicated by weather radar. With its ability to detect the movement of precipitation within a cloud, Doppler radar technology has greatly advanced the accuracy of tornado warning. Using the principle known as the Doppler effect, Doppler radar can identify the initial formation and subsequent development of the mesocyclone within a thunderstorm that frequently precedes tornado development.