Chapter 5--
Forms of Condensation and Precipitation

Clouds, visible aggregates of minute droplets of water or tiny crystals of ice, are one form of condensation. Clouds are classified on the basis of two criteria: form and height.

Clouds Out My Window ---- https://www.weather.gov/media/owlie/CloudsOutMyWindow.pdf

Test yourself - Do you know the clouds?

Clouds of Vertical Development - Cumulus and Cumulonimbus. They develop into towers or domes. 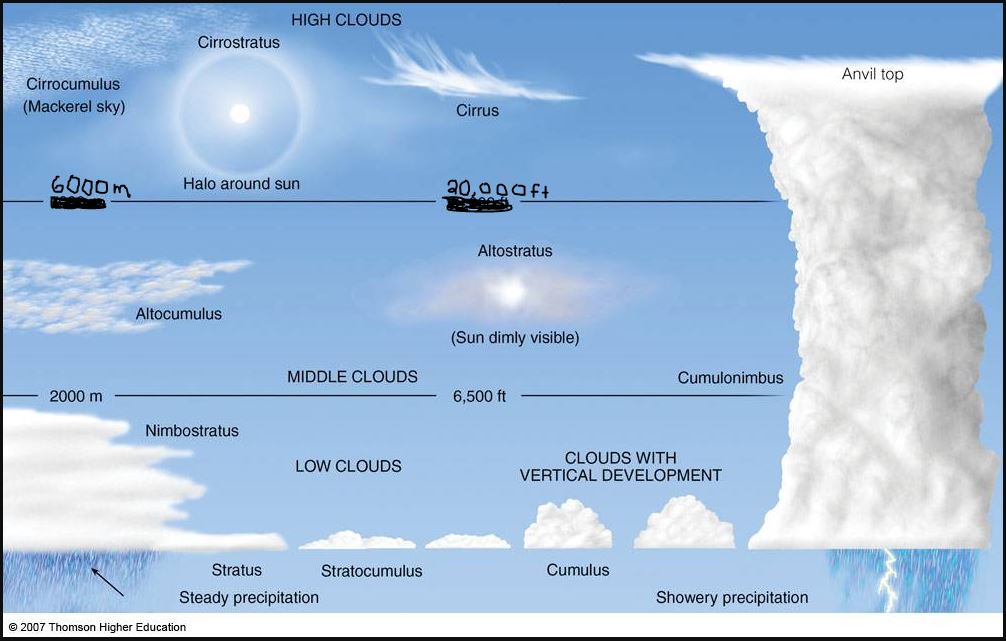 For precipitation to form, millions of cloud droplets must somehow coalesce into drops large enough to sustain themselves during their descent.
The two mechanisms that have been proposed to explain this phenomenon are:
Bergeron process, which produces precipitation from cold clouds primarily in the middle latitudes
1. Supercooled - water in a liquid state below 0C
2. Freezing Nuclei - Supercooled droplets freezing on contact with solid materials. -10C or below
The warm cloud process most associated with the tropics called the collision-coalescence process. Large droplets fall more rapidly than smaller droplets,
they are able to sweep up the smaller ons in therepath and grow.

The two most common and familiar forms of precipitation:
Rain (drops of water that fall from a cloud and have a diameter of at least 0.5 millimeter) --Tempertures Above 32F/0C
Snow (precipitation in the form of ice crystals or, more often, aggregates of ice crystals). Temperatures Below 32F/0C
Other forms include sleet (falling small particles of ice that are clear to translucent), glaze (formed when supercooled raindrops turn to ice on colliding with solid objects), hail (hard, rounded pellets or irregular lumps of ice produced in large cumulonimbus clouds), and rime (a deposit of ice crystals formed by the freezing of supercooled fog or cloud droplets on objects whose surface temperature is below freezing). BELOW ARE EXAMPLES OF HOW DOPPLER RADAR LOOKS *********Rain, the most common form of precipitation, is probably the easiest to measure. The most common instruments used to measure rain are the standard rain gauge, which is read directly, and the tipping bucket gauge and weighing gauge, both of which record the amount and intensity of rain. The two most common measurements of snow are depth and water equivalent. Although the quantity of water in a given volume of snow is not constant, a general ratio of 10 units of snow to 1 unit of water is often used when exact information is not available. At 32 degrees F, 1 inch of liquid rain would be about 10 inches of snow. At 19 Degrees F, 1 inch of liquid would be about 20 inches of snow.

Fog, generally considered an atmospheric hazard, is a cloud with its base at or very near the ground.
Fogs formed by cooling include radiation fog (from radiation cooling of the ground and adjacent air),
Advection fog (when warm and moist air is blown over a cold surface)
Upslope fog (created when relatively humid air moves up a slope and cools adiabatically).
Those formed by evaporation are steam fog (when rising water vapor over warm water condenses in cool air) and frontal fog (when warm air that is lifted over colder air generates precipitation that evaporates as it descends and saturates the air near the surface).